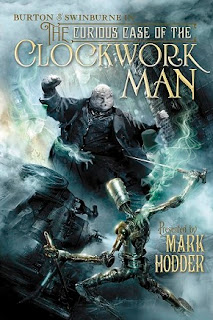 By my count, I managed to read 46 books during the past year.

While that may seem like a lot (or not very many to some voracious readers), it was still six books shy of my goal of 52 books, that is, one book a week.

You’ll find a list below of the books that I finished this year, and it was easy for me to pick out my favorite book, or shall I say, books of the year. Without a doubt, my hands-down favorites were the first two books in Mark Hodder’s Burton and Swinburne Series – “The Strange Case of Spring Heeled Jack” and “The Curious Case of the Clockwork Man.”

I decided to read “The Strange Case of Spring Heeled Jack” after it won the 2010 Philip K. Dick Award, and I thought that the book was one of the finest, most entertaining novels I’d read in a long time. It was an easy choice to snap up a copy of “the Curious Case of the Clockwork Man” when it hit the shelves.

The third book in the series, “Expedition to the Mountains of the Moon,” will be released in late January, and I’m really looking forward to read it. If it’s as good as the first two, it will be awesome.

Without further ado, here’s the list of books that I read during the past year. Which of these books have you had the chance to read? Which did you like or dislike and why? What was your favorite book from the past year, regardless if it’s on the list below or not? Let us know in the comments section below.

6. “At the Mountains of Madness: Definitive Edition” by H.P. Lovecraft
7. “The Blue Jacket’s Manual” by Thomas J. Cutler
8. “Christmas Tales of Alabama” by Kelly Kazek
9. “The Curious Case of the Clockwork Man” by Mark Hodder
10. “Duncan’s Ritual of Freemasonry” by Malcolm A. Duncan

21. “The League of Extraordinary Gentlemen, Vol. 1” by Alan Moore
22. “Locke and Key: Welcome to Lovecraft” by Joe Hill
23. “The Mediterranean Caper” by Clive Cussler
24. “Miss Peregrine’s Home for Peculiar Children” by Ransom Riggs
25. “Murder in Amityville” by Hans Holzer

36. “The Symbolism of Freemasonry” by Albert G. Mackey
37. “The Temple and the Lodge” by Michael Baigent
38. “Thank You Notes” by Jimmy Fallon
39. “Three and Out” by John U. Bacon
40. “A Visit from the Goon Squad” by Jennifer Egan

41. “Vixen 03” by Clive Cussler
42. “Whitechapel Gods” by S.M. Peters
43. “Wilderness Medicine” by Thomas Schimelpfenig
44. “Wind, Sand and Stars” by Antoine de Saint-Exupery
45. “The Worst Journey in the World” by Apsley Cherry-Garrard
46. “Zoo City” by Lauren Beukes
Posted by Lee Peacock at 7:00 AM