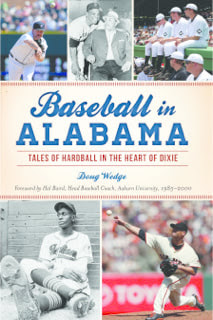 I finished reading a new book on Saturday that I think many baseball fans in the reading audience would enjoy, “Baseball in Alabama: Tales of Hardball in the Heart of Dixie” by Doug Wedge.

Released on May 28 by The History Press, this 224-page book features a wide variety of Alabama baseball tales, and I found it to be a quick, enjoyable read. Wedge does a good job of discussing well-known Alabama baseball legends like Hank Aaron, Willie Mays, Willie McCovey, Ozzie Smith, Bo Jackson and Tim Hudson, but he does an even better job of telling about lesser-known players with Alabama ties like Alex Grammas, Bob Veale, Ron Jackson, Britt Burns, Gary Redus, Mackey Sasser, Chris Hammond, Todd Jones and others.

As you would imagine, much of the book discusses the Major League players that Alabama has produced over the years, but the book also discusses college and junior college baseball in Alabama and the many success stories that those programs have produced over the years. Featuring a foreword by Hal Baird, who served as Auburn University’s head baseball coach from 1985 to 2000, Wedge highlights the humble high school, JUCO and college beginnings of such stars as Tim Hudson and others. Throughout it all, Wedge shows how their hard work, determination – and a little luck – paid off in the end for many of those players.

I especially enjoyed the portions of the book that talked about Minor League teams in Alabama, including the old Mobile Bears teams of the 1950s, the Birmingham Barons, and the now-defunct Montgomery Rebels and Huntsville Stars. Much of the book also describes historic Rickwood Field in Birmingham, which is the oldest professional baseball park still in use in the United States. Nicknamed “Old Rickety-wood,” this 10,800-seat ball park was built in 1910 and is one of the few ballparks listed on the National Register of Historic Places.

As with many history books, a close reading of “Baseball in Alabama” shows just how much has changed over the years and how much has stayed the same. No matter when or where in Alabama they were born, many of Alabama’s most famous baseball players had much in common when it comes to their love for the game and their willingness to give back to their communities once their playing days were over. As the book shows, many of Alabama’s best all-time players later became coaches, at many different levels of baseball, and they continue to pass on their baseball skills and knowledge to the state’s up-and-coming crop of baseball athletes.

In the end, as a lifelong baseball fan, I consider myself generally well-versed when it comes to Alabama baseball history, but I was pleasantly surprised to read a lot that I didn’t know about Alabama baseball in Wedge’s new book. He took the subject to a deeper level that both serious and casual fans will find enjoyable and fun to read. With that said, if you’re a baseball lover, who also likes to read, do yourself a favor and get a copy of “Baseball in Alabama.”
Posted by Lee Peacock at 1:43 PM