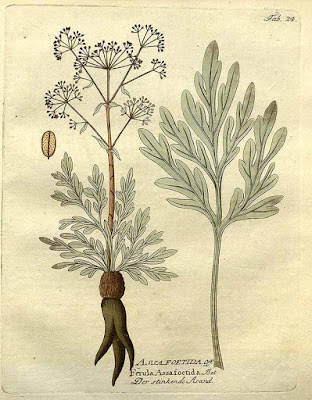 A month or so ago in this space, I wrote about how Wilcox County was unable to escape the lethal clutches of the 1918 Spanish flu pandemic, which killed three to five percent of the entire world’s population. The first reported flu deaths in Wilcox County took place in October 1918, and it’s still unclear just how many Wilcox County residents died from the disease before the pandemic was declared over in December 1920. Just based on reports in local papers, dozens of Wilcox County citizens succumbed to the disease, especially the very old and the very young.

Related to all this, I ran across a number of century-old articles during that past week that described an unusual aspect to the flu epidemic in Wilcox County and elsewhere in Southwest Alabama – the exhaustion of the asafetida supply. I admit that I’m no expert when it comes to asafetida, but when I looked it up I learned that it’s a “fetid resinous gum obtained from the roots of an herbaceous plant, used in herbal medicine and Indian cooking.”

During the fall of 1918, asafetida flew off drug store shelves, and the scarcity of this unusual product was blamed on superstitious customers who put a lot of faith in old remedies that featured asafetida as the key ingredient. As soon as flu cases began to show up in large numbers in Wilcox County and adjacent counties, there was an almost immediate and “significant” shortage of asafetida in stores. One newspaper source said that superstitious locals habitually wore little bags of asafetida and camphor around their necks to prevent contagions and infections.

All of this was foreign to me and sparked my interest, and when I dug a little deeper, I learned that there’s all sorts of legends and folklore associated with asafetida, which is sometimes spelled “asafoetida.” Also known as “devil’s dung,” asafetida has a strong, pungent smell and is believed to have originated in the ancient Middle Eastern countries of Afghanistan and Iran. In traditional medicine, it’s been used to treat everything from abdominal injuries, asthma, bronchitis, colds, constipation, epilepsy, flatulence, whooping cough and other ailments.

Several sources that I checked said that folk tradition and folk magic practitioners used asafetida to treat and prevent illnesses by storing it in a small pouch or bag worn around the neck on a lanyard. These “acifidity bags,” as they were sometimes called, were worn by young and old alike and most especially by babies and school-age children. In later years, long after the Spanish flu, these bags made comebacks during polio and measles outbreaks in America.

Of course, there were other, darker, superstitions surrounding asafetida. Some believed that it would ward off evil and could help the wearer harm their enemies. In some old rituals, it was thought to help grant wishes, and at times it was also used in exorcisms. On the other side of the coin, asafetida was thought to bring good luck and to protect people from curses.

In any event, asafetida flew off store shelves in Southwest Alabama during the fall of 1918 as the Spanish flu pandemic extended its deadly claws into our part of the world. It would be interesting to know what our modern doctors and pharmacists think of asafetida and if asafetida can be purchased anywhere locally today. It would also be interesting to know if anyone in the reading audience regularly wears an “acifidity bag” or if they know how to make one. If so, please contact me to let me know because I’m sure that readers of the newspaper would enjoy hearing about it.
Posted by Lee Peacock at 12:34 PM