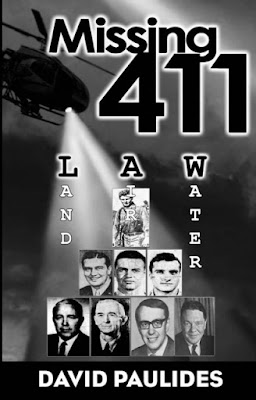 Over the weekend, I finished reading David Paulides’s new book, “Missing 411: Land, Air, Water” and I found his latest book to be just as intriguing as the other seven books in his series on people who have mysteriously vanished around the world under unusual circumstances.

Paulides, an investigative reporter and former police detective, released “Missing 411: LAW” on Sept. 28, and his new book carries on his groundbreaking research into missing people who have vanished on land, in and around water, and also unusual disappearances involving private, military and commercial aircraft. Using historical data and information pulled directly from accident reports and case files, Paulides shows in this 375-page book how many of these disappearances occur in geographical clusters that he’s described in his earlier books.

Those of you who have read Paulides’s other books will know that he doesn’t just present run-of-the-mill missing person cases. His books only describe those that meet a pre-established set of profile points that he looks for while combing through thousands of missing persons reports. These cases typically involve incidents in which tracking dogs either inexplicably lose a missing person’s scent or unable to find a scent at all. He also describes cases in which unusual weather plays a role, either by delaying or halting search efforts.

Paulides also takes a close look at cases in which the missing person is found, but with certain items of clothing either missing or worn improperly. I was surprised by the number of cases in the book in which people are found with one or both shoes missing for no apparent good reason. In some cases, the person isn’t found at all, only their clothes.

Paulides also details cases that involve individuals with disabilities and illnesses as well as cases that involve bodies of water, boulders and granite, and swamps and bogs. Through his research, Paulides has identified numerous missing persons “clusters” around the country where unusual disappearances happen frequently, especially in and around national parks.