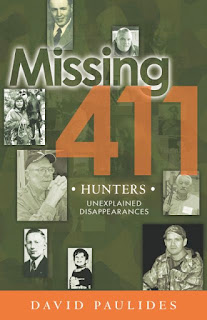 “Missing 411 – Hunters: Unexplained Disappearances” by David Paulides is one of the most fascinating – and creepy – books I’ve ever read, and I think a lot of you in the reading audience, especially hunters, would be interested in reading it as well.

Published earlier this year, this 348-page book details nearly 150 unusual cases of hunters who have gone missing across the country over the years, the vast majority of which vanished without a trace and whose bodies have never been recovered.

In his book, Paulides, an investigative journalist who has spent much of his career investigating missing people, doesn’t detail just regular, run-of-mill missing hunter cases. Instead, every case in the book meets certain unusual criteria, including cases where search dogs can’t find a scent, cases involving unusual weather, cases near locations where others have gone missing, cases were the victim is found in an area previously searched, cases involving bodies of water and cases involving hunters with disabilities or illnesses.

Paulides also takes a close look at cases in which the hunter disappears in the late afternoon or early evening. According to Paulides, the predominant time that disappearances occur is just before it gets dark.

What follows is page after page of highly researched reports of people from all walks of life who vanish while hunting throughout the country for all sorts of wild game. The earliest reports in the book go back into the 1890s and some occurred as recently as last year. Paulides also does a good job of connecting the dots between different cases, often separated by decades, that have bizarre similarities that will not only make you think, but will also probably leave you looking over your shoulder the next time you step foot in the woods.

One particular aspect of the book that I found extremely interesting is how Paulides points out that bow hunters go missing at a higher rate than hunters with firearms. He indicates that bow hunters have to use stealth to get close to their targets to get a good shot and may find themselves right on top of something unexpected while slipping through the woods.

Another interesting aspect of the book is that Paulides leaves the explanations for these disappearances up in the air. The book does a great job of showing that something is happening out there in the woods, but what it is is up for discussion and debate. If you’re looking for a good book that will really make you think, “Missing 411 - Hunters” is one that you will not want to miss, especially if you spend a lot of time in the outdoors.