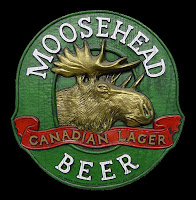 A few days ago – for the first time – I got the chance to sample a bottle of Moosehead Lager and was more than a little pleased by this tasty beer, which won a gold award at the 2003 World Beer Cup.

Moosehead Lager comes in a green bottle and is stamped on one side with the word “Moosehead” and with “Quality and Tradition” on the other side. According to the label, this beer is brewed and bottled by Moosehead Breweries in Saint John New Brunswick, Canada. This brewery, founded in 1867, claims to be Canada’s oldest independent brewery.

There are a number of interesting bits of trivia about this beer. Its popularity fell during the 1980s, but it experienced resurgence when actor Michael J. Fox, a native of Canada, plugged Moosehead in his autobiography, “Lucky Man.” In the book, Fox tells about how he told Tonight Show host Jay Leno the he didn’t like beers brewed in America because they were too watered down. He went on to say that he preferred Moosehead Ale. (A short time later, Moosehead delivered a huge truckload of Moosehead Ale to Fox’s house as a gift.)

Moosehead beer is also somewhat famous (or infamous) for having two truckloads go missing in recent years. A truck loaded with 60,000 cans of Moosehead bound for Mexico disappeared in August 2004. Most of the beer was recovered, and the search for the missing beer, which featured distinctive Spanish-language labels, was the subject of a book, "Beer Bandit Caper: The Mounties, Their Man and Mexico's Missing Moosehead" by Harvey Sawler.

In September 2007, two trailers containing 77,000 cans and 44,000 bottles of Moosehead (valued at $200,000) also went missing. An arrest was made in the case, but most of the beer was not recovered with police believing that most of it had been sold illegally to bars.

In the end, I really enjoyed this beer. How many of you out there in the reading audience has had a chance to sample this fine belly-washer? What did you think about it? Let us know in the comments section below.

For more information about Moosehead Lager and the other beers mentioned above, visit the brewery’s Web site at www.moosehead.ca.
Posted by Lee Peacock at 4:40 PM