100-year-old news highlights from The Monroe Journal from Jan. 1916 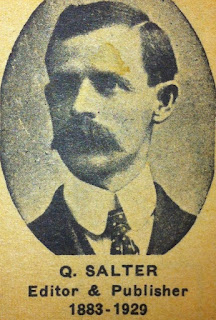 The Monroe Journal newspaper in Monroeville, Ala., under the direction of editor and proprietor Q. Salter, published four editions 100 years ago during the month of January 1916. Those issues, which were dated Jan. 6, Jan. 13, Jan. 20 and Jan. 27, can be found on microfilm at the Monroe County Library in Monroeville, Ala. What follows are a few news highlights from those four editions. Enjoy.

Mr. L.A. Hale, one of Manistee’s prosperous farmers, was in to see us Wednesday. Mr. Hale is well fixed for the coming year in the pork line, having already saved upward of 3,000 pounds. His hogs dressed 300 pounds each.

Prof. E.P. Yeldell, principal of the city school, spent the holiday vacation with relatives at Brewton.

Dr. F.S. Dailey of Tunnel Springs has been appointed County Health Officer for Monroe County for 1916.

The first term of the County Court for the new year was held Monday, Judge I.B. Slaughter presiding. The docket was somewhat lighter than on some former occasions.

Mr. Riley Kelly of Excel was in to see us a few days ago. He reports very satisfactory holiday trade, largely the result of liberal advertising in The Journal, he was kind enough to say.

County Superintendent J.A. Barnes has invested in a brand new car and will now better than ever be enabled to make close and efficient supervision of rural schools.

By the matriculation of some half a dozen or more new pupils since the holiday recess, the enrollment at the Monroe County High School reached the high water mark of 114. Prof. Harris advises that there are others yet to come. Accommodations are ample for all who desire to avail themselves of the splendid advantages offered by this school.

Mr. W.L. Metts, supervisor of road construction by the county convicts, has recovered sufficiently from his recent illness to resume his duties.

Mr. W.M. Stabler was up from Jeddo the first of the week. Mr. Stabler says most of the people in his section are well supplied with home produced corn, forage and meat although money is somewhat scarce.

Mr. V.J. Reinke, proprietor of the Claiborne Ranch, was a visitor to the city Tuesday, accompanied by his farm manager, Mr. George Seaback. Mr. Reinke expects to locate a colony of some 50 Polish families on his extensive property in the vicinity of Perdue Hill.

Monroeville has experienced this week the first real breath of winter during the season. Following the rain on Sunday, the temperature dropped with marked suddenness and sleet and ice were in evidence for three days.

The mid-winter term of the Monroe County Law and Equity Court convened on Monday, Judge W.G. McCorvey presiding. The court is grinding away on the civil docket this week, the number of cases, however, is not unusually large. Few beside jurors, witnesses, court officials and parties litigant are in attendance.

Mr. B.W. Booker was up from Goodway Tuesday.

W.J. Galloway, one of Roy’s leading merchants, was a business visitor to the county capital the first of the week.

Capt. W.A. Andrews of Perdue Hill was at the county capital Saturday and favored The Journal with a pleasant call. Capt. Andrews was a gallant Confederate soldier and regarded as one of the best drill officers in the service. He is pleasantly remembered by many who were members of the Monroe County Corps, a local military company which flourished some twenty-odd years ago and which was organized and commanded by him.

Mr. Walter S. Harper, a gifted member of the staff of The Montgomery Advertiser, spent several days in Monroe this week, visiting various towns and communities in the collection of data for the adequate representation of Monroe County’s resources in the forthcoming “All-Alabama” edition of The Advertiser.

Capt. J.H. McCreary of Turnbull was a visitor to the county capital Wednesday.

The Preachers’ School began at the Baptist church on Monday as previously announced and the sessions are interesting and instructive. The attendance is not quite so large as had been expected.

Mr. J.T. McCarthy, the railroad contractor, was here for a few days this week. Mr. McCarthy will probably keep his construction outfit in the county until the work of putting the Deep Water road bed in apple pie shape for regular train service is completed.

Among recent business changes in Monroeville is the purchase of the Lyon Pharmacy by the Coxwell Drug Co. Mr. J.R. Lyon, late proprietor of the pharmacy, has accepted an advantageous position in Montgomery and will leave in a few days to assume his new duties.
Posted by Lee Peacock at 8:41 AM