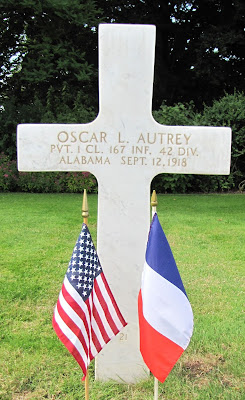 What follows are 100-year-old news excerpts from the Oct. 24, 1918 edition of The Wilcox Progressive Era newspaper in Camden, Ala.

A new residence is about completed near the railroad. It will be occupied by L&N Railroad employees.

Hon. Sol. D. Bloch of Mobile is looking after business interests in Camden this week.

S.J. Ervin, who has been at the Gulf Port Military Academy, is at home for a few days. He has just recovered from an attack of influenza.

All schools of the county have been closed until Mon., Nov. 4. If the influenza epidemic is still unabated, they will be suspended longer. Notice will be given through these columns.

Camden friends of Messrs. McCrea Turner and Clem Harris will be pleased to learn that both of these young men were recently commissioned second lieutenants. These promotions are well earned and well deserved.

Mr. R.L. Hawthorne has recently received a letter from his son, Judson, who states that as a diversion from the noise of battle strife, he amused himself by playing on a piano in a captured German dugout. He is making a collection of souvenirs from the battlefield, which no doubt will be most interesting to folks back home.

The casualty list of this week names three from Wilcox among the number wounded. They are Robert Cannon of Camden, Poat Hudson of Annie Manie and Woodie Bennett of Millers Ferry.

Two more Wilcox boys have made the supreme sacrifice, Autry and Kelley, both of Pine Hill. This makes four of our boys to find their last resting place on the fields of Liberty. Beneath the “popies of Flanders they sleep, but ever they live in the hearts and minds of the French and Belgian, whom they help to free from the clutches of German atrocities.

Oscar Autrey, son of Mr. and Mrs. Haddox Autrey of Pine Hill, has given his life for the cause of democracy. Mr. Jessie Kelley of Pine Hill is reported as wounded in action. Two other soldiers, Robert Cannon of Camden and Woodie Bennett of Millers Ferry, are reported severely wounded.

Camden so far has been very fortunate in the attack of influenza. Only a few cases have so far been reported and none serious. However, strict precautions is the common sense course and we fear that we have escaped so far more from luck than through our use of discretion.

Lt. Sidney Bryant, who has just completed his course in aviation, is at home with his mother, Mrs. J.D. Bryant, Sr., on several days furlough. Sidney says flying is the ideal sport and is anxious to take a shot at the Hun from the air.

A telegram from New York to Dr. E.T. McWilliams states that Joe McWilliams died Oct. 15. For several days, conflicting telegrams had come, leaving an uncertainty in the minds of relatives and friends regarding his condition. Joe has one brother in France, Prime, who has suffered wounds. The cause of death was Spanish influenza.
Posted by Lee Peacock at 2:37 PM