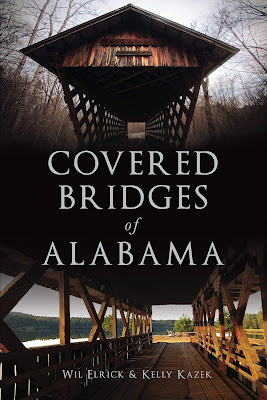 “Covered Bridges of Alabama,” a new book by Wil Elrick and Kelly Kazek, is one of the most fascinating books that I’ve read in a long, long time, and I highly recommend it to anyone in the reading audience with an interest in Alabama history and historic structures.

I was especially interested in the portions of the book that discussed the legends and lore associated with many covered bridges. The book actually includes an entire chapter on supposedly haunted covered bridges in Alabama and a chapter on general myths and legends related to covered bridges. The “haunted” bridge closest to Conecuh County is said to be in Livingston, which is about 2-1/2 hours from Evergreen.

Livingston residents have claimed for over 130 years that the Alamuchee Bridge in Livingston is haunted by a ghost, and some say that this spirit is the ghost of Sumter County Sheriff Steve Renfroe who was hanged on the bridge by an angry mob in 1886. Some say that his ghost only appears on the anniversary of his death – July 13 – but others say that he appears at the bridge nightly. Whatever the case, it’s said that many of the town’s older residents refuse to cross this bridge, especially at night.

According to “Covered Bridges of Alabama,” there are only 11 authentic historical bridges left in the state, but at one time there were many more. Most of these were torn down, but some were destroyed by floods and other disasters. Some were even burned by arsonists.

With that said, it would be interesting to know if anyone in the reading audience knows of or remembers any covered bridges in Conecuh County. These types of bridges were often located near old grist mills, like the covered bridge at Rikard’s Mill in northern Monroe County.

Information about these old bridges is extremely important to scholars and historians, so if anyone knows of any old covered bridges in Conecuh County, please let me know. I’ll be sure to pass along this information to Elrick and Kazek. In the meantime, if you enjoy reading about Alabama history, and especially historic structures like covered bridges, I highly recommend that you check out “Covered Bridges of Alabama.”
Posted by Lee Peacock at 11:22 AM