Annual reenactment of 'Battle of Fort Mims' will be held Aug. 24-25 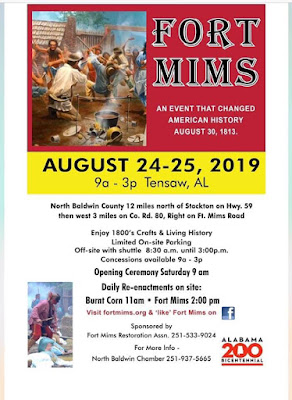 I got word this week that the annual reenactment of the Battle of Fort Mims will be held later this month at the old fort site at Tensaw, down in Baldwin County.

In addition to the reenactments, they’ll also have living history displays complete with old weapons and clothes. Traditional Creek Indian games will also be played, and a variety of speakers will make presentations on the history of the fort. Artifacts will also be on display, and a variety of craft demonstrations will be made, including arrowheads, wool spinning, blacksmithing, quilting, period music, basketry, pottery, watercolors, skinning, archery, flint-napping and woodworking.

I’ve been to the reenactment numerous times and the first time that I took my kids down there, I explained to them that what they were about to see wasn’t real, that the people in reenactment were only pretending. I thought it best to have that talk with them beforehand because the reenactment is so realistic that I wanted the kids to know ahead of time that it wasn’t real.

If you’ve never been to the old fort site, don’t worry because it’s easy to get to. To get there from Evergreen, take Interstate Highway 65 south to the Stockton Exit, and then take State Highway 59 north 12 miles out of Stockton to County Road 80. From there, turn left on CR 80, travel three miles and follow the signs to where the reenactment will be held on Fort Mims Road.

Organizers are offering on-site parking, and you can also park off-site and then take a shuttle to the fort. The shuttle is scheduled to run each day from 8:30 a.m. to 3 p.m. Concessions will be sold from 9 a.m. to 3 p.m. each day.

More information about the event can be found at www.fortmims.org or by calling the North Baldwin Chamber of Commerce at 251-937-5665 or the Fort Mims Restoration Association at 251-533-9024.
Posted by Lee Peacock at 2:42 PM