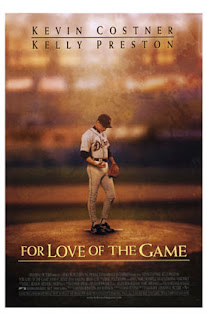 I’ve always enjoyed a good baseball movie, and I like to think that I’ve watched most of the “classics” of the baseball movie genre. However, every once in a while, I’ll be pleasantly reminded that I haven’t seen every great baseball movie. A year or so ago, I ran across a “best of” baseball movie list that included 1999’s “For Love of the Game,” which I actually had never seen.

Not long after that, I put “For Love of the Game,” which people often mistakenly call “For the Love of the Game,” on my “bucket list.” Thanks to NetFlix, I finally got around to watching this great baseball movie from start to finish on Saturday night. Now that I’ve officially watched it, I can see why it’s considered a “baseball classic.”

For those of you who haven’t seen this movie, it’s about fictional Detroit Tigers pitcher Billy Chapel, who at 40 is at the very end of his career. In what’s shaping up to be his final game, he proceeds to work toward throwing a perfect game. Throughout what’s looking like his best pitching performance ever, we see a series of flashbacks that show us scenes from his baseball past as well as from his long-distance relationship with his girlfriend.

I was interested to learn that this movie was based on a novel by Michael Shaara, also called “For Love of the Game.” I saw this in the opening credits and it jumped out at me because, as many of you probably know, Shaara won a Pulitzer Prize in 1975 for his famous Civil War novel, “The Killer Angels.” Shaara died in 1988 and his baseball novel was discovered by his son, author Jeffery Shaara, who had the novel posthumously published in 1991.

The novel is relatively short with its hardback edition coming in at just 152 pages. However, the motion picture version of the story is relatively long with a run-time of two hours and 17 minutes. Admittedly, at this point, having now seen the movie, I’m left wanting to read the book, because as the old adage goes, the book is almost always better than the movie.

If you enjoy a good baseball movie, I highly recommend that you check out “For Love of the Game” if you haven’t seen it already. It’s got a little something for everybody, and especially for baseball fans.

In the end, how many of you have seen “For Love of the Game”? How many of you have read the original novel? Which other baseball movies or books would you recommend? Let us know in the comments section below.
Posted by Lee Peacock at 10:54 AM