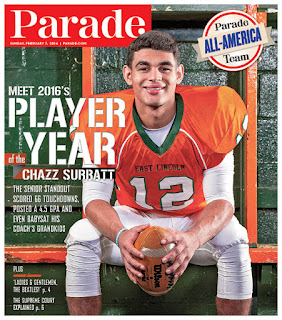 Parade Magazine has been picking an All-American football team every year since 1963, and this year’s team marked the 53rd annual All-American High School Football Team. Getting picked for this all-star team is one of the highest honors a prep football player can receive and is a good indicator as to what sort of career these players will have. Past Parade All-Americans include Joe Montana, Dan Marino, Joe Namath, Jack Del Rio, Herschel Walker, John Elway, Marcus Allen, Ronnie Lott, Tony Dorsett and Thurman Thomas.

In all, including players on the 2016 team, 79 high school players from Alabama have been selected to the Parade All-American team. As you might imagine, football fans will recognize many of these names.

In 2010, two players from Alabama made the team. They were Theodore High School linebacker C.J. Mosley and Stanhope Elmore High School defensive back Demarcus Milliner. In 2011, Spanish Fort center Reese Dismukes was the only Alabama player to make the team, and Hueytown quarterback Jameis Wilson was the lone player from Alabama to be named to the team in 2012.

Hoover is the only school in the state to have four players named to the Parade All-American team. Sixteen schools have had two players named to the team. They are Andalusia, Auburn, Central of Phenix City, Central-Tuscaloosa, Foley, Gadsden City, Homewood, Huffman, Jeff Davis, Mountain Brook, Opelika, Tarrant, Theodore, Vigor, Williamson and Woodlawn.