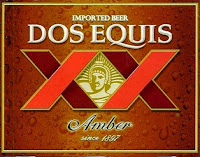 Dos Equis beer is known the world over for its outstanding quality, and many of you will be familiar with the most popular brand of Dos Equis beer, which is called Dos Equis XX Special Lager and comes in a green bottle.

Dos Equis XX Special Lager and Dos Equis XX Ambar are brewed and bottled by Cuauhtemoc-Moctezuma Brewery, which is based in Monterrey, Nuevo Leon, Mexico. This brewery, which is now a subsidiary of Heineken International, was founded in 1890. Dos Equis was originally brewed by German-born Mexican brewer Wilhelm Hasse in 1897.

Many of you will be familiar with Dos Equis because of its “The Most Interesting Man in the World” advertising campaign, which features actor Jonathan Goldsmith and Frontline narrator Will Lyman. This campaign was launched in 2007 and encourages Dos Equis’ drinkers to “Stay Thirsty, My Friends.”

Here’s what the bottle has to say about Dos Equis Ambar: Crafted in Mexico since 1897 to commemorate the arrival of the “XX” Century, Dos Equis stands for “Two X’s” in Spanish. In our second century of fine brewing tradition, we continue offering Dos Equis Ambar, a rich robust flavored beer with the smooth drinkability of a classic dark-style lager, a true Mexican work of art.

If you look closely at a bottle of Dos Equis, you can’t help but see the famous "Double X" logo, but if you look a little more closely, you’ll see a face between the two X’s on the bottle. This is the face of Montezuma, the 16th Century Aztec ruler who was conquered by Hernando Cortez.