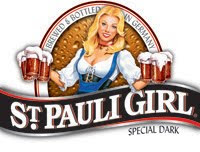 A few days ago, I got the chance to sample a bottle of St. Pauli Girl Special Dark, and I was very impressed with this distinctive, German beer.

Brewed at the St. Pauli Brauerei (which is German for “brewery”) in Bremen, Germany and imported by Crown Imports of Chicago, this is a “remarkably smooth beer with a light hop character and rich malty taste,” brewery officials said. “Using the same high-quality ingredients in the lager, the malt in St. Paul Girl Special Dark is slow roasted using a centuries-old recipe. This gives St. Pauli Girl Special Dark unparalleled taste and a uniquely vibrant color.”

This beer has also been named a Gold Medal winner by the American Tasting Institute in the category of Best Full Calorie German Dark Beer. This beer contains 4.8 percent alcohol by volume and a 12-ounce serving contains 150 calories.

For more information about this beer, visit www.stpauligirl.com/dark.php.

St. Pauli Girl Special Dark is currently one of three beers brewed by the St. Pauli Brewery, which is actually located in the Beck’s Brewery in Bremen. The other two styles are St. Pauli Girl Lager and St. Pauli Non-Alcoholic Malt Beverage.

This beer is also known for its distinctive label, which features a buxom blonde lady in traditional German garb, holding three huge mugs of foaming beer in each hand. These labels have been around since the advent of bottling beer and the original artist based his St. Pauli Girl on the waitresses of his time.

Since 1982, the brewery has chosen a model to represent the beer, and for the past two years, the St. Pauli Girl spokes model has been Slovakian model, Katarina Van Derham.

In the end, I enjoyed this beer and would have no problem trying it again. Have any of you had the chance to sample a bottle of St. Pauli Girl Special Dark? If so, what did you like about it? What did you dislike? Let us know in the comments section below.