'Elf on the Shelf' book is No. 41 on USA Today best-seller list 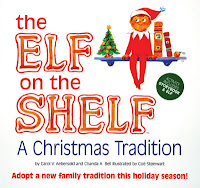 Normally, in this space on Sundays, I give you a weekly review of the Publishers Weekly Best-Seller Lists for hardcover fiction and nonfiction, mass market paperbacks and trade paperbacks.

This week, however, it appears that the good folks at Publishers Weekly have taken a well deserved week off and haven’t updated their online best-seller lists because of the latest holiday. They normally release their best-seller lists on Thursday, and last Thursday, as you all know, was Thanksgiving.

For that reason, I’m having to offer you something a little different this week. The boys down at USA Today apparently don’t get as much time off, and they did come out with their best-seller list this week, and as you’ll see it’s a little different from Publishers Weekly’s list.

Whereas, Publishers Weekly gives you the best-sellers in four separate formats, USA Today gives readers an overall list of the top 50 best-selling books, regardless of format. This list is based on reports that it receives from a number of bookstores nationwide, including Amazon.com, B.Dalton Bookseller, Barnes & Noble, Books-A-Million, Booland and Borders Books & Music.

As a reminder, I’m posting this list on Sunday because, as a whole, it represents a great, contemporary recommended reading list. USA Today and Publishers Weekly initially release their lists each week on Thursday, and if you’re interested in reading them then, visit Publishers Weekly’s Web site at www.publishersweekly.com or USA Today online at www.usatoday.com.

Below you’ll find this week’s USA Today best-seller list, and here’s the key to understanding some of the abbreviations used in this list: F-Fiction; NF-Nonfiction; H-Hardcover; P-Paperback.

In the end, let me know if you’ve had a chance to read any of these books. What did you think about them? Which would you recommend? Let us know in the comments section below.
Posted by Lee Peacock at 5:56 PM