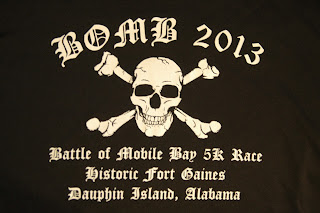 I scratched another item off my “life list” on Saturday morning when I ran in the 17th Annual Battle of Mobile Bay 5K on Dauphin Island, Ala.

This is a race that I’ve wanted to run for a long time, but I’d just never taken the time to do so until Saturday. All in all, it was a great experience.

Sponsored by the Port City Pacers running club in Mobile, the Battle of Mobile Bay 5K is one of the most unique footraces in Alabama. Since 1996, it’s been held on Dauphin Island and begins and ends at historic Fort Gaines. Built in 1821, this fort played a major role during the Civil War’s Battle of Mobile Bay. It was during that August 1864 battle that Union Admiral David Farragut said those famous words, “Damn the torpedoes, full speed ahead!”

Saturday’s race officially began with a cannon blast at 9 a.m. and followed a 3.1-mile route through the island’s scenic neighborhoods. Starting in front of the Dauphin Island Sea Lab’s administration building, just up from the west entrance to Fort Gaines, the course proceeds up Bienville Blvd. The route then takes you along Audubon Street, Chenault, Cavalier Circle, Conde, Diard, Audubon Drive and Buchanan before putting you out on Bienville Blvd. for the homestretch back to the finish line. Dauphin Island’s not a big place, with a population of around 1,300, so you get to see a fair amount of the island during this 5K.

The weather on Saturday was a little cool, but the wind made it feel a lot colder. Blasting in off the water, the high winds made it somewhat uncomfortable, but once we got going it wasn’t so bad. By the end of the race, I’d rolled my sweatshirt sleeves up and eventually came all the way out of my sweatshirt when I made it back to my truck.

In the end, I enjoyed scratching another item off my “life list” and will probably run this race again at some point in the future. How many of you have ever ran the Battle of Mobile Bay 5K? What did you think about it? Can you recommend any other unique footraces that are “bucket list” worthy? Let us know in the comments section below.
Posted by Lee Peacock at 1:05 PM