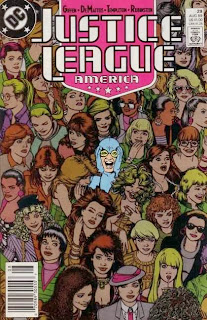 “Justice League America” #29 was a 24-page issue that begins with Fire and Big Barda having a training session on the rooftop of the JLA Embassy in New York. Fire’s trying to get a grip on her powers and appears to be just learning to fly. Barda chastises Fire for not taking the training seriously.

Behind the scenes, Barda tells Martian Manhunter that she hasn’t trained anyone in a long time and feels that she’s grown soft. To step up the training, Barda heads to her car to get her “Mega-Rod” out of the trunk. Unfortunately, when she gets outside, she discovers that her car has been stolen. Barda heads off to find her car, which ends her training session with Fire, who is still on the roof.

From there, the story shifts to Mt. Sinai Hospital, where Blue Beetle is in a coma, and Nabu is explaining his situation to Batman, Oberon and Max Lord. Nabu, one of the Lords of Order, explains that he’s now inhabiting the corpse of Kent Nelson, the former Dr. Fate. When Nelson died, Nabu “empowered his body,” and the others hope that he can wake Blue Beetle from his coma, which was caused by a hypnotic “Azrael Block” placed on him by Queen Bee. Batman, Oberon and Lord watch as Nabu leaves Nelson’s body and enters Blue Beetle’s mind.

Back at the embassy, Mr. Miracle’s using a tracking device to help Barda home in on her stolen car. Fire tags along to help when Miracle’s “Mother Box” picks up the Mega-Rod’s scent.

Meanwhile, Nabu finds himself in Blue Beetle’s mind, which is crowded with images of beautiful women. Nabu realizes that these images are probably what’s keeping Beetle’s mind tethered to his body. Nabu eventually finds Beetle deep within the dark recesses of his mind, where he’s staring into a small point of light.

Nabu explains to Beetle that he’s been sent to bring him home. They discuss the mystery of the light that Beetle’s fixated on, and Nabu tells him that he can't go to the light because he’s got unfinished business topside. When Nabu tries to lead Beetle back to reality, Nabu discovers the presence of an enormous rock wall – the “Azrael Block” that’s been programmed into Beetle’s mind.

Back at the embassy, Beetle’s best friend, Booster Gold, is locked alone in his room, fuming over Beetle’s situation. He’s been told by the other JLA members that he’s been programmed by the Queen Bee too, just like Beetle, and could “explode at any moment, just the way Beetle did.”

From there, the story shifts back to the hospital, where Batman, Oberon and Lord are waiting on Nabu to bring Beetle back. Oberon and Lord are starting to lose patience, but Batman encourages them to wait. At the same time, inside Beetle’s mind, Nabu figures out how to get Beetle around the “Azrael Block.”

Things take an odd turn when Beetle shows back up in reality, but in Nelson’s dead body instead of his own. While Batman’s trying to calm down an upset Beetle, Nabu wakes up in possession of Beetle’s previously comatose body. Nabu explains that he couldn't break the block, so he switched bodies with Beetle and will switch their personalities back into the right bodies to make things right. At that point, Batman does an about face and leaves the hospital, business finished in his eyes.

Some time passes before the next scene, which takes place at the JLA embassy. Beetle’s back in uniform and he’s discussing what happened with Martian Manhunter, Ice, Oberon and Guy Gardner. While they’re talking, Nabu’s upstairs with Booster Bold, straightening him out as well. They all here Booster Gold scream from upstairs when he wakes up in Nelson’s dead body.

The issue comes to an end with a scene set in Bayonne, New Jersey. Mr. Miracle, Barda and Fire are on the hunt for Barda’s stolen car and missing Mega-Rod. They eventually land in a toxic waste part of town, where they find Barda’s car smashed to pieces. It looks like it’s been dropped out of an airplane, and Miracle discovers that three bodies have been crushed in the wreckage.


As the three heroes discuss what's happened, they’re rocked by an explosion that sends them flying. Miracle gets to his feet first only to be confronted by a young punk armed with Barda’s Mega-Rod. The issue ends with a tease to the following issue in which the heroes will have to deal with this lethal punk.


This comic (unless I’ve sold it) and others are available for purchase through Peacock’s Books on Amazon.com. If you’re interested in buying it, search for it there by title, issue number and date of publication.
Posted by Lee Peacock at 11:40 PM