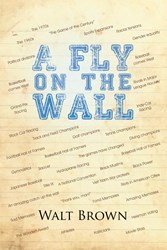 Those of you in the reading audience who enjoy a good sports-related book would probably enjoy reading a new book by Walt Brown called “A Fly on the Wall.”

This book was cool for the inside look it gives into the career of a long-time radioman, and it should be required reading for any young person out there considering a career in sports radio. Copies of the book are available for purchase online through Amazon and Barnes & Noble.

The third week of our local ESPN College Football Pick ‘Em contest came to a close Saturday night and a few close games resulted in a reshuffling of the Top 10. I hold a narrow, one-point lead over Jeremy Matheny, who was No. 2 overall. Hunter Norris remained in third place, and Aaron Albritton moved up from fifth place to fourth place.

Only 22 points separated the No. 1 spot in the Top 10 from the person in the No. 10 spot, and it goes without saying that next week there’ll be more than a few changes in the Top 10. We’ve got 12 more weeks to go, so who knows who will be at the top when the season comes to an end.

SEC football fans have three head-to-head match-ups to look forward to this weekend with the rest of the SEC teams facing a handful of non-conference opponents. Here are my pick for those nine games. I like Alabama over Colorado State, LSU over Auburn, Florida over Tennessee, Georgia over North Texas, Missouri over Indiana, Vanderbilt over UMass, Arkansas over Rutgers, Mississippi State over Troy and Texas A&M over SMU. Kentucky, South Carolina and Ole Miss do not play this week. Last week: 7-1. So far this season: 28-5.

Week Three of the NFL regular season kicks off tonight (Thursday) with a game between the Kansas City Chiefs and the Philadelphia Eagles. That game will kick off at 7:25 p.m. at Lincoln Financial Field in Philadelphia. Fourteen games will follow on Sunday, and the Monday night game will feature the Oakland Raiders at the Denver Broncos.

Tonight, I look for the Eagles to beat the Chiefs. On Sunday, I like Houston over Baltimore, Carolina over the New York Giants, Washington over Detroit, Tennessee over San Diego, New Orleans over Arizona, New England over Tampa Bay, Cincinnati over Green Bay, Dallas over St. Louis, Minnesota over Cleveland, Miami over Atlanta, the New York Jets over Buffalo, San Francisco over Indianapolis, Seattle over Jacksonville and Chicago over Pittsburgh. On Monday night, I look for the Broncos to beat Oakland. Last week: 14-2. So far this season: 26-6.
Posted by Lee Peacock at 9:52 AM