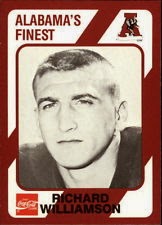 From “Front Page, Upper Left Corner” by Bob Bozeman - “The Evergreen Quarterbacks have pulled one off the top shelf in getting Richard Williamson as speaker for the football banquet on Jan. 7. Richard is one of Bear Bryant’s top young assistants, in fact he was put in charge of preliminary planning for Nebraska in the Orange Bowl.
“I’m sure most of you will remember Richard as a fine pass receiver and very tough defensive end for the 1961 National Championship team at ‘Bama. I understand he doesn’t rate any way but at the top when it comes to saying a few words after dinner too.
“Tickets for the banquet go on sale Friday morning. Only $2 for men and $1 for boys. So, buy early and plan now to hear Richard Williamson, one of America’s top young coaches and a fine young man along with it.
“Incidentally, he plans to bring with him John Moseley, the fine safetyman and sideback on the Tide’s defensive team last year and this year. Bear says that John handles punts better than any player he has ever coached. You might not know this, but John was coached in high school by none other than our Evergreen High principal, Morris Ward. Morris was coach over at Thomaston for 10 years and one of the state’s finest.”

“Douglas Potts Named On News All-State Team: Douglas Potts, 197-pound Evergreen High Aggie tackle, was named to a tackle post on the second string of The Birmingham News Class A All-State Football Team announced Sunday. The News selected two all-state teams this year, one for the big schools and one for schools with less than 400 enrolled in the senior grades.
“Being named to this team was quite an honor for Douglas and for the Aggies. He is a senior and has already signed a scholarship with the University of Alabama.
“The only other Aggie to get mention on any of the all-state selections was Max Pope, husky senior guard, who received honorable mention on The Montgomery Advertiser-Journal team.”

“Aggies Edge Lyeffion For Third Straight Win: The Evergreen High Aggies edged the Lyeffion High Yellow Jackets, 27-22, Monday night in Memorial Gym here for their third straight win of the season.
“Jeff Moorer was the key man in the win for Evergreen. Battling Jeff topped the Aggie scorers with eight points in addition to doing about 90 percent of the rebounding for the short Aggie squad. Gwyn Daniels basketed seven points and Ed Hooks six. Gillis Morgan shot four, and Bobby (Pistol Pete) Wells two to finish up the scoring for Evergreen.
“Miller Dees tossed in three field goals and as may foul shots to account for nine points of the Lyeffion total. George Waters had six, Hilton Dees four and Jack Jones three.
“In a preliminary contest, the Lyeffion Bees took a close 29-25 decision over the Evergreen junior varsity.
“Charlie Brock furnished the punch for Lyeffion, dropping 14 points. Pace Bozeman collected nine points before leaving the game on five personal fouls to lead the Aggies.
“Officials were Harvill and Lewis of the Central Alabama Officials Association, Montgomery.”

“NEW FULLBACK BREAKS INTO LINEUP AT EVERGREEN HIGH: A new fullback broke into the lineup at Evergreen High School this week. Although his program weight, seven pounds, 10 ounces, is a little light for line-bucking chores, it’s understood that the newest Aggie can really throw his weight around. The new fullback probably won’t get the nod to open a game until the fall of 1966 or 1967.
“Giving this back more than the usual amount of attention is Coach Wendell Hart, who is also father of the newborn Aggie. The birth took place at Stabler’s Infirmary Monday afternoon.
“Coach and Mrs. Hart, the former Gerry Godwin, have named their son James Wendell Jr.
“Local football fans hope the Aggies will only do as well when young Wendell is playing as they have done since Coach Hart became headman in 1946. Evergreen has won 35, lost seven and tied five under Coach Hart.”

“Lyeffion Losses To Miller; Defeats Repton by 28-20: The Lyeffion Yellow Jackets broke even in a pair of games last week losing to T.R. Miller, 33-19, in Brewton last Wednesday and beating Repton, 28-20, in Repton Friday night.
“Jerry Woods pushed 16 points through the cords to pace Coach Hal Wyatt’s Millers to their second win of the season over the Jackets. Bobby Long and Bill Rowell each had five.
“Hilton Dees hit for 10 points as he joined with Miller Dees to furnish most of the scoring punch for Coach Morris Ward’s Jackets. Miller Dees had six points, George Waters two and Jack Jones one.
“Friday night the Jackets tripped Repton, 28-20, in the Repton Gym to avenge a close, 29-28, loss handed them by the Bulldogs a week earlier. This game was close and exciting throughout.
“Miller Dees led the way to the win by basketing 10 points. Jack Jones had six, George Waters and Hilton Dees, four each; and Frank Burt and Billy Booker, two each.
“Coach Charles Pouncey’s Bulldogs were led by James Andrews and Junior McMillan with six points each. Burt had five; Holley, two; and William Ivey, one.
“The Jackets wound up their Pre-Christmas slate Tuesday night playing Castleberry at Lyeffion. They return to action Jan. 9 playing McKenzie at Lyeffion.”

“Evergreen Eagles Trounce Andalusia 105 to 20: The Evergreen Eagles girls and boys basketball teams opened their 1950-51 basketball season here last Fri., Dec. 15, by running up record scores against Andalusia’s girls and boys teams.
“The girls played the opening game and defeated the girls from Andalusia by a score of 48-7.
“The Eagles with one of the best teams in the school’s history completely outclassed Andalusia. Outstanding players were Herbert Rankins with 42 points; Leonard Goldsmith, 19; James Welch, 18; Louis Ingram, 16. The game ended 105-20 in favor of the Eagles.
“Coaches Kennedy, Cheatham and King will test their teams this week by engaging in two games with Atmore.”

“Aggies Lose First Game To Frisco City By 44-42: Coach Wallace Joiner’s Frisco City Whippets snapped at three straight an early-season undefeated string of the Evergreen Aggies in a touch-and-go contest here Tuesday night in Memorial Gym.
“Gwyn Daniels, Evergreen’s leading scorer in all but one game, had a ‘hot’ third quarter in which he racked six field goals as the Aggies all but overcame Frisco’s halftime lead. He had dropped four points in the first half and added four in the final frame to total 20 and top the scorers.
“Center B.B. Barnes furnished the big blows in the Frisco offense and totaled 18 points to lead their scorers. Pugh and Gulsby had eight each, Baas, seven, and King, six, for Frisco. Jeff Moorer bagged eight; Ed Hooks, six; and Gillis Morgan and Pete Wells, four each.”

“Former Evergreen Boy Dist. Scout Executive: Roscoe E. Stevens, formerly of Evergreen, is the new executive for the Southeast Alabama area, Boy Scouts of America, according to a newspaper article published last week in The Abbeville (Ala.) Herald.
“Stevens is a graduate of the Evergreen Agricultural School and is a nephew of L.M. Stevens of this city.”

“Visitors to our community (Fairfield) must not forget to ask Gordon Nichols the latest method on catching and keeping opossums, as he’s having much success lately.”
Posted by Lee Peacock at 9:34 AM