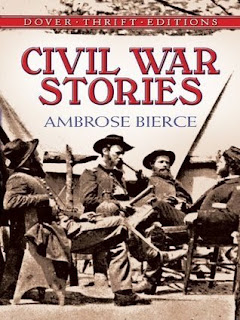 Several years ago, I ran across a “best of” list of Civil War books and saw where the compilers of the list included a book I’d never heard of by one of my favorite authors, “Civil War Stories” by Ambrose Bierce. I’ve been a fan of Bierce for as long as I could remember, and I was kind of miffed that I’d never read his book of Civil War stories. Not long after that, I officially added this book to my “bucket list” and resolved to read it as soon as possible.

A month or so ago, I finally found a copy of the book published by Dover Thrift Editions in 1994. This slick 123-page softcover book contains 16 of Bierce’s Civil War stories that were originally published in “The Collected Works of Ambrose Bierce” (Volumes I and II) in 1909. I started reading it on Aug. 15 and finished it four days later, on Fri., Aug. 19.

Stories included in the book are “What I Saw of Shiloh,” “Four Days in Dixie,” “A Horseman in the Sky,” “An Occurrence at Owl Creek Bridge,” “Chickamauga,” “A Son of the Gods,” “One of the Missing,” “Killed at Resaca,” “The Affair at Coulter’s Notch,” “The Coup de Grace,” “Parker Adderson, Philosopher,” “An Affair of Outposts,” “The Story of a Conscience,” “One Kind of Officer,” “George Thurston” and “The Mocking-bird.” One reason these stories are so popular has to do with the fact that Bierce actually served in the Civil War as a member of the Union’s 9th Indiana Volunteers and witnessed a lot of action first hand. For that reason, his stories ring with a sort of eye-witness realism that you won’t find in stories by authors who didn’t serve in the war.

“An Occurrence at Owl Creek Bridge” is arguably the most famous story in the book. It’s often included in high school literature text books, and I remember reading it years ago as a teenager. I especially enjoyed reading it again in Bierce’s “Civil War Stories” because, since I last read it, I’ve actually been to the location said to have inspired this tale, the Sulphur Creek Trestle in Limestone County, Ala.

I really enjoyed reading Bierce’s “Chickamauga,” a story that I had not read prior to reading this book. I’m directly descended from at least two Confederate veterans who fought at the Battle of Chickamauga, and I enjoyed reading Bierce’s story about the battle. This ended up being probably my favorite story in the entire book. Just writing these lines makes me want to pick it up and read it all over again.

I like the other stories in the book as well. Bierce is known for his unusually dark, weird style, and he doesn’t disappoint in this short story collection. The mystery and irony that he’s come to be known for shines through in almost every one of the stories in his “Civil War Stories” book.

In the end, how many of you have read “Civil War Stories” by Ambrose Bierce? What did you think about it? Which of the short stories in the book was your favorite? Let us know in the comments section below.
Posted by Lee Peacock at 10:12 AM