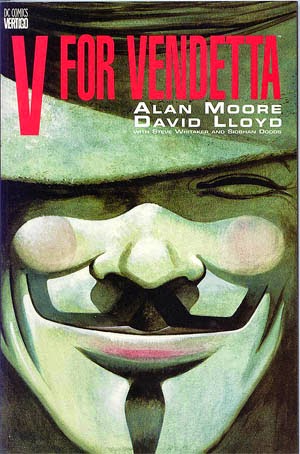 The “V for Vendetta” graphic novel is generally considered to be one of the finest graphic novels ever produced. Written by comic book legend Alan Moore, “V for Vendetta” was originally published in the 1980s and you’ll find it on numerous “best of” lists. I’ve had it on my “bucket list” for a while and finally finished reading it on Sunday.

“V for Vendetta” was originally published by DC Comics in a 10-issue comic book series between March 1982 and May 1989. Most of the art was drawn by David Lloyd, but portions of it were drawn by Tony Weare. Later, it was collected and published in trade paperback and deluxe hardback editions. The edition I read was the 286-page trade paperback edition, which I bought used for less than $14 on Amazon.

Many of you will be familiar with “V for Vendetta” thanks to the very slick motion picture adaptation of the book, which starred Natalie Portman, Hugo Weaving, Eric Finch, Stephen Rea and John Hurt. Released on March 17, 2006, the movie went on to gross 132.5 million at the box office. However, as you might imagine, there are big differences in the original graphic novel and the movie. (Hint: The graphic novel is better - much better.)

For those of you unfamiliar with the “V for Vendetta” story, the graphic novel and the movie are both set in dystopian versions of England in the near future, where a Guy Fawkes mask-wearing hero has launched a one-man crusade to bring down the oppressive, totalitarian regime. “V,” as the main character is known, is a concentration camp survivor, who is not only seeking revenge on past camp administrators, but is also salvaging lost bits of classic art, literature and music. As the story progresses, he teams up with a young woman named Evey Hammond, and he trains her to help carry out his plans and to eventually take his place.

The “V for Vendetta” graphic novel was a quick read. It only took me two days to finish, but it was great nonetheless (and a lot different from the movie). It’s very gritty, violent and contains more than a few adult themes. It’s definitely for mature readers only.

For whatever reason, I’ve always been somewhat drawn to dystopian novels and stories, and I’d ranked “V for Vendetta” among the best. It reminded me a lot of such classics as “1984,” “Fahrenheit 451,” “Blade Runner” and “Brave New World” with a little Robin Hood and Batman thrown in for good measure. If you like that sort of thing, I highly recommend this graphic novel.

In the end, how many of you have read the “V for Vendetta” graphic novel? What did you think about it? Did you like it or not? What other graphic novels would you recommend? Let us know in the comments section below.
Posted by Lee Peacock at 7:31 PM