110-year-old news highlights from The Monroe Journal from Dec. 1905 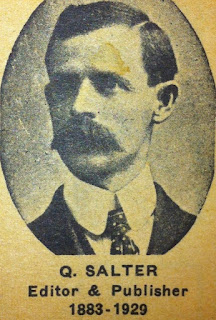 The Monroe Journal newspaper in Monroeville, Ala., under the direction of editor and proprietor Q. Salter, published only three editions 110 years ago during the month of December 1905. Those issues, which were dated Dec. 7, Dec. 13 and Dec. 21, can be found on microfilm at the Monroe County Library in Monroeville. What follows are a few news highlights from those four editions. Enjoy.

Mr. D.K. Smith is attending the session of the Grand Lodge in Montgomery.

Dr. T.M. McMillan left Monday for Montgomery to attend the annual session of the Masonic Grand Lodge of Alabama.

Mr. Reuben Perry of Perdue Hill passed through town Monday on his way to Montgomery where he goes to attend the Masonic Grand Lodge as the representative of Alabama Lodge No. 3.

Mr. and Mrs. J.H. Anderson of Jones Mill were in town Monday shopping and favored The Journal with a call. Mr. Anderson informed us that the post office has been removed from its former site to Snider Crossing on the Manistee & Repton railroad, a distance of about one mile; also that efforts are being made to secure the establishment of a rural free delivery mail route to be served from that point.

His many friends are glad to see J.B. Barnett, Esq. out again after several days sickness.

Mr. A.T. Sowell went to Mobile Sunday to serve as a grand juror in the United States Court for the Southern District of Alabama.

Capt. McGill, conductor on the Southern Alabama railway, stopped off for a few days with Monroeville friends last week.

Rev. B.H. Crumpton will preach at Drewry on the second Sunday in December at 11 o’clock a.m. All are cordially invited to attend.

Dr. J.B. Stallworth has removed to Ozark for the practice of his profession.

Mr. J.D. Rawls and family are comfortably situated in their handsome new dwelling on South Highlands.

Dr. G.C. Watson, a graduate of the Atlanta Dental College, has located at Monroeville for the practice of his profession.

Mr. A.B. Tucker returned last week from a two-week trip to Texas in company with Capt. T.A. Nettles, Dr. D.R. Nettles and Mr. M.M. Fountain. Mr. Tucker says Texas is a great country, but old Alabama is good enough for him yet awhile.

The Journal is not given to boasting, but it is with pardonable pride that we mention the fact that more than 1,000 inches of local advertising is printed in this issue.

Tax Collector Marshall reports heavy collections of taxes during the last two months, the aggregate being in excess of $11,000.

The Inter Se Circle of Perdue Hill High School will have a public meeting at the town hall Friday evening Dec. 15 and present a very interesting program. After the program, oysters will be served for the benefit of the school building. Everybody come. Oysters! Oysters! Oysters!

NO PAPER NEXT WEEK: It is a custom in many newspaper offices to issue no paper during Christmas week, thus affording the hard worked printer a brief interval of rest and recreation. While such has not been the custom of The Journal, we shall make an exception this season, omitting the regular issue next week. We do not expect, however, to waste the time in idleness or dissipation, but in filling orders for job printing and putting the office to rights for an even start with the new year.

Mr. A.B. Coxwell, student at the Alabama Medical College, Mobile, is spending his holiday vacations with his parents at Mexia.

The Journal was in error in stating last week that Dr. J.B. Stallworth had removed to Ozark. He has located to Opelika.

Church Festival: There will be a church festival at the home of Dr. W.A. Stallworth, Beatrice, Ala., on Wednesday evening, Dec. 27, 1905; for the benefit of Moore Street Baptist Church. All are cordially invited.

Mr. W. Barney Mims, who is attending medical lectures at the Vanderbilt University, Nashville, Tenn., is spending the holidays with his parents and other relatives in Monroe.

J.B. Barnett, Esq. spent a few days in Mobile last week on professional business.
Posted by Lee Peacock at 9:05 AM