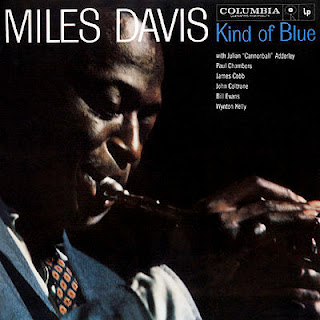 Just about everyone has heard of world famous jazz musician Miles Davis, who passed away at the age of 65 in 1991. To put it mildly, Davis was a prolific recording artist, having recorded 48 studio albums, 36 live albums, 35 compilation albums and dozens of other types of recordings. Arguably Davis’ most famous album is “Kind of Blue,” which was released on Aug. 17, 1959.

In 2003, Rolling Stone magazine ranked “Kind of Blue” at No. 12 on its list of the “500 Greatest Albums of All Time,” and for some time it irked me that I had never listened to this influential jazz album in its entirety. For that reason, I added it to my “bucket list” a couple of years ago, and I finally took the time to listen to it from start to finish on Sunday. I’m glad I did because it’s great, and I can now see why the album's so highly regarded.

To say that “Kind of Blue” was a successful album would be putting it mildly. In the U.S., it was certified platinum four times and was selected by the Library of Congress for inclusion in the National Recording Registry in 2002. Davis was already well known when the album debuted, but "Kind of Blue" propelled him to the status of jazz legend.

If you’re interested in listening to “Kind of Blue” yourself, it’s pretty easy. The album is widely available on CD and you can also buy it through iTunes and other online outlets. You can even find complete, high-quality versions of it on YouTube.

Personally, I thought the album was great. It’s easy to listen to, and is the sort of music that you can just sit back, close your eyes and enjoy. There are no lyrics, so there’s no following along to make sure that you can understand all the words. The album’s also relatively short, so it doesn’t require a huge investment in time to listen to the entire thing in one sitting.

Now that I’ve finally listened to “Kind of Blue,” I’m left wanting to listen to some of Davis’s other well-known albums. In addition to “Kind of Blue,” Rolling Stone also included two other Davis jazz albums on their list of “500 Greatest Albums.” The ranked 1970’s “Bitches Brew” at No. 95 and 1960’s “Sketches of Spain” at No. 358. Several of my friends have highly recommended that I listen to “Bitches Brew.”

In the end, how many of you have ever listed to “Kind of Blue” by Miles Davis from start to finish? What did you think about it? What other Davis albums or jazz albums would you recommend? Let us know in the comments section below.
Posted by Lee Peacock at 6:24 PM