Book describes one of most heinous crimes in Wilcox County history 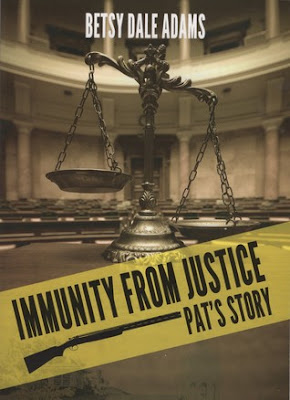 About a month ago, someone sent me a copy of a book called “Immunity from Justice: Pat’s Story,” which describes one of the most heinous crimes in Wilcox County history, the 1983 shotgun slaying of 27-year-old Patrick Dale. Written by Betsy Dale Adams and published in 2014 by Mascot Books, “Immunity from Justice” details the events surrounding Dale’s death and mentions more than a few Wilcox County residents. In fact, some of you reading this column right now might just find your names between the covers of this book.

Many of you in the reading audience will remember Dale’s murder, which took place on July 16, 1983. A few hours before he was killed, Dale, a 27-year-old resident of Evergreen, was enjoying himself with friends in the lounge of the Holiday Inn in Evergreen. Before leaving, a man he didn’t know well named Douglas Edward Griffin, also a 27-year-old resident of Evergreen, asked Dale if he’d give him a ride home.

Dale agreed to do so in exchange for $5 in gas money, but little did he know that Griffin had just been released from a state mental institution 72 days before and that he had a history of violence and substance abuse. When Dale arrived at Griffin’s home, Griffin asked him to wait while he went inside to get his gas money. When he returned, it wasn’t with gas money, it was with a loaded shotgun.

At trial, evidence showed that Griffin forced Dale to drive him toward Tuscaloosa. When they reached Wilcox County, Griffin made Dale get out of the car near an abandoned roadside park, just off Wilcox County Road 89, near Snow Hill, about 15 miles east of Camden. Griffin then shot Dale in the head and chest, dragged him into the woods and covered him with brush.

Griffin continued on to Tuscaloosa, where he sold Dale’s car for a quick $200. A few days later, Highway Department worker Emanuel Hardly discovered Dale’s decomposing body, and Griffin was arrested a short time later. At the end of his trial in Camden, Griffin was found guilty and was given a sentence of life without parole. According to the Alabama Department of Corrections, Griffin is currently still behind bars at Holman Prison in Atmore.

In the end, if you’re interested in reading more about the events leading up to and after Dale’s death, I highly recommend that you read “Immunity from Justice.” While it does contain a lot of gruesome details, it’s also the best source you’ll find on one of the most heinous crimes in Wilcox County history. Plus, you might find your name or that of a relative somewhere within the pages of this book.
Posted by Lee Peacock at 3:32 PM