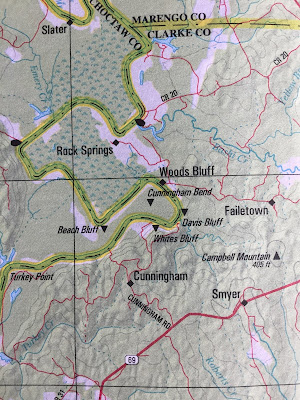 (For decades, local historian and paranormal investigator George “Buster” Singleton published a weekly newspaper column called “Somewhere in Time.” The column below, which was titled “Traveling yesterday’s pathways” was originally published in the Sept. 27, 2001 edition of The Monroe Journal in Monroeville, Ala.)

Friday, the 21st of September, was one of those days when my vagabond blood reached an all-time high. For some reason or another, it seemed that somewhere across the Alabama River, a voice called from the distance.

All I could think about the night before was going back into the area of lower Clarke County and visiting once again some of those almost forgotten places that I was familiar with. As the early morning of the 21st appeared on the eastern horizon, I saddled my iron horse and headed westward. The weather report predicted it might rain a little; what the heck, I have been wet before.

This was not to be a scenic tour of that back country; I had in my mind the places where I was going. This had all been planned the night before. Strange, how places such as these can press the mind. A strong desire comes forth to return at once to places that seem to cry out from the distance.

After a quick cup of coffee in Grove Hill, I followed Highway 43 northwestward to Thomasville. Turning toward the community of Bashi, it wasn’t long before I was making the turn west at the community of Morvin on Highway 69 and on to the small community of Campbell.

Leaving the pavement, I turned toward the old family community of Faile Town. Here, my mother’s people had settled in the early 1800s and formed their own community, with school and church and family cemetery.

Very little remains there today except one or two old houses that suffer from the decays of time. But here at the old family cemetery, deep in the woods, was to be my starting point, just as I had planned the night before.

First, I visited the graves of my grandparents and then the graves of my great-grandparents. My great-grandfather had worn the uniform of the Confederacy in the Civil War. He had been wounded near Lookout Mountain and was crippled the remainder of his life. Nearby was the final resting places of two great-great-uncles. They, too, had fought for the cause of the Confederacy.

Many memories of my early childhood with my grandparents came to mind as I closed the small gate of the small family cemetery nestled there in the deep woods.

A rough and tedious ride of about three miles brought me close to the entrance of the cave where the outlaw Rube Burrow had camped on several occasions. When he passed through the area, he would always camp here in this ancient cave overnight or sometimes for a couple or three days.

During these stays there under the steep hillside, known as the Mountain, he would always take time to visit my grandparents’ home. He knew that there was always a good meal to be had here. They were always excited to see Rube Burrow because he always knew what was going on in the outside world, and this is how they came by receiving the recent happenings around the area.

Looking back into the dark hole there in the side of the hill, I remembered the several nights that I had gotten up enough nerve and strength to camp there inside the cave. I will be the first to admit that there inside this dark cave wasn’t an outstanding place to get a good night’s sleep. But that’s another story. Being hard-headed and dumb seems to be one of my traits.

Finally, making my way back to the pavement of Highway 69, I traveled to the base of the same high hill opposite of where I had just left. This large hill known as the Mountain covers a considerable area, and over the years, many strange and frightening events have taken place among the steep slopes and deep crevices.

Standing there, looking up the Mountain toward a steep cliff or drop off, I thought of the stories that my grandfather had relayed to me, when as I child I would sit spellbound for hours, listening to strange stories passed down through the family of the strange happenings that took place.

I remember him telling how the leaders of the early Indian tribes would gather there at the foot of the cliff on the nights when the full moon cast its light on the limestone cliff. There, they would dance and chant and each in turn would tell their stories of their successful hunts and their gathering of fish from the large river, now known as the Tombigbee, not far away.

I was told of how the ghosts of these ancient dancers yet danced there at the base of the cliff on the nights of the full moon. I was told by grandfather how his father, a disabled soldier of the Confederacy would make his way to the base of the mountain and watch the ghost dancers as they danced and chanted in their strange language there in the bright moonlight.

I remember the night very well, not too long ago, when I journeyed this way to the base of the cliff to see for myself the ghost dancers of the mountain and listen for the distant sounds of their ghost drums as it floated there around the cliff in the moonlit air.

I remember, too well, that awful long night, when it seemed that dawn would never come there at the foot of the limestone cliff. As I prepared to depart this place, I vowed that I would one day return to witness the ghost dancers here at the foot of this high hill called the Mountain.

After a quick visit to the old church and cemetery located atop the high hill and a quick walk down to the grave of the old circuit-riding preacher who had performed the marriage ceremony between my wife and me, I stopped in a small flower garden not far from the old church.

The several other places I wanted to visit would have to wait. Looking at my watch, I knew that I would barely have time to reach the Hub City and home before darkness settled across the bottoms. My vagabond blood had been satisfied somewhat, but the lust to wander yet dwelled within me. Oh well, hopefully, there will be other times.

(Singleton, the author of the 1991 book “Of Foxfire and Phantom Soldiers,” passed away at the age of 79 on July 19, 2007. A longtime resident of Monroeville, he was born to Vincent William Singleton and Frances Cornelia Faile Singleton, during a late-night thunderstorm, on Dec. 14, 1927 in Marengo County, graduated from Sweet Water High School in 1946, served as a U.S. Marine paratrooper in the Korean War, worked as a riverboat deckhand, lived for a time among Apache Indians, moved to Monroe County on June 28, 1964 and served as the administrator of the Monroeville National Guard unit from June 28, 1964 to Dec. 14, 1987. He was promoted from the enlisted ranks to warrant officer in May 1972. For years, Singleton’s columns, titled “Monroe County history – Did you know?” and “Somewhere in Time” appeared in The Monroe Journal, and he wrote a lengthy series of articles about Monroe County that appeared in Alabama Life magazine. It’s believed that his first column appeared in the March 25, 1971 edition of The Monroe Journal. He is buried in Pineville Cemetery in Monroeville. The column above and all of Singleton’s other columns are available to the public through the microfilm records at the Monroe County Public Library in Monroeville. Singleton’s columns are presented here each week for research and scholarship purposes and as part of an effort to keep his work and memory alive.)
Posted by Lee Peacock at 11:12 AM