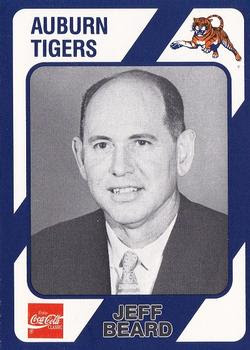 Lynne Salter, 15-year-old daughter of Tony and Pat Salter of Monroeville, is a member of the Alabama High School Rodeo Association and will be competing in the State Finals in Montgomery June 13-15. The top four will go to Pueblo, Colo. in July to compete in the national competition.
Statewide, Lynne is ranked fifth in Girls Breakaway, fifth in Goat Tying and 16th in Team Roping.

Block Busters lead softball: Evergreen Men’s Softball has gotten well under way with the “Block Busters” taking the lead with three wins and no losses. Tied for second and third are the “Super Chickens” and the “Go Getters” and having the last place well in control are the “Saints.”
Games are played Tuesday and Thursday nights. First game gets underway at 6:45. Games are played at the north end of Brooks Stadium. No admission so “Ya’ll Come.”

From “Front Page, Upper Left Corner” by Bob Bozeman: The annual Rotary Fish & Wildlife Camp will be held at Camp Tal Stuart, near Belleville, next Wednesday and Thursday. About 60 young boys are expected to take part in the two-day and a night camp receiving instructions in spin, bait and fly casting, skeet, rifle range, trapping, water safety, game management, forestry, etc.
Evergreen Rotary sponsors the camp which has won a number of state awards.
Earl Kennemer, wildlife specialist for Auburn Extension Service, will be at the camp again this year. Earl always makes it when he can. You’ll find a picture of him elsewhere in this issue with one of his bream catches and he’ll be on ETV next week.
If you get a chance, drop by the camp and see those boys, not only having a grand time, but also getting some mighty good instruction from some fine adults who give their time and efforts.

Locals Defeat Monroeville By Score of 7 to 4: By gaining an early lead in Sunday’s game, the locals managed to stay ahead in the closing innings and win over Monroeville by a 7 to 4 margin. Monroeville’s improved hitting and Evergreen’s poor fielding gave the visitors three runs in the late part of the game.
The Greenies ran up four runs in the third inning by getting a single, a double and a triple. An error and a walk also helped the locals to gain this lead.
Hart’s pitching was the Greenie’s main defensive weapon. Of the 27 Monroeville men retired, 13 men went down on strike outs. Several rallies were cut short by these strike outs.
Johnson and Ivey led the locals in hitting, each slashing out two hits. Johnson had a double and a triple while Ivey had a double and a single.
The following games have been scheduled: June 13, Georgiana, here; June 16, Uriah, there; June 20, Monroeville, there; June 23, Flomaton, there; June 27, Monroeville, here; June 30, Atmore Prison, site pending.

Auburn Football Tickets Are Now On Sale: AUBURN, ALA. – Orders for tickets to Auburn’s 1946 football games are now being received by Athletic Department Business Manager Jeff Beard and early indications are that record crowds will witness the Tigers nine battles this Fall.

D.A. and R.L. Frye have returned from a fishing trip on the Alabama River.