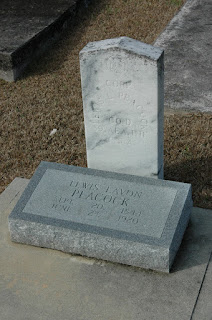 I scratched another item off my life list on Saturday when my family and I visited the grave of my great-great-great-grandfather, Lewis Lavon Peacock.

Ever since I was a small boy I’ve heard stories about Lewis Lavon Peacock, a Confederate soldier who was with Robert E. Lee when he surrendered at Appomattox, Va. on April 9, 1865. Lewis wasn’t in the room at the moment of surrender or anything, but he was among Lee’s forces on that historic day. I’d always been fascinated by this snippet of family history, but for whatever reason I’d never taken the time to visit Lewis’ final resting place.

Almost all of what I know about Lewis Lavon Peacock comes from a book by John J. Pierce called “The Children of Levi Peacock,” which was published in hardback in 2002. Born on Sept. 20, 1844 in Coffee County, Ala., Lewis enlisted in Kolb’s Battery at the age of 17 on April 30, 1862. Kolb’s Battery later became a part of Hilliard’s Legion and later the 59th Alabama.

Lewis served in campaigns in Kentucky and Tennessee, including Chickamauga, before the regiment was transferred to Virginia in the spring of 1864. After remaining a private in Co. D for most of the war, he was promoted to fourth corporal on May 5, 1864, no doubt for service in the Bermuda Hundred campaign, where the 59th so distinguished itself. Lewis, who never learned to read or write, eventually came down with acute diarrhea and was admitted to General Hospital at Howard’s Grove, Richmond on July 19, 1864.

He was granted a 45-day furlough on Aug. 23, 1864 then on Aug. 26, 1864 he was issued a passport to return home to Rocky Head, Ala., evidently to recuperate from his illness. Rocky Head is an unincorporated community in Dale County, Ala., located southwest of Clio.

Lewis returned to duty on Jan. 7, 1865 and was with the Army of Northern Virginia when Lee surrendered at Appomattox three months later. In his Confederate pension application, Lewis later deposed that he had been wounded at Petersburg. After the surrender, Lewis had to walk all the way home and within a year or two, he’d moved to the vicinity of Burnt Corn in Conecuh County, Ala.

Lewis married and lived in that area for the next 20 to 25 years, working as a sharecropper. He and his wife had 10 children, including my great-great-grandfather, John Singleton Peacock. Lewis died of influenza on June 23, 1920 and was buried at Flat Rock Church, which he helped build.

A year or so ago, my brother John told me that he’d found Lewis’ grave in at cemetery at Flat Rock, and I told myself then that I’d like to go see it for myself someday. A week or so ago, Sherry Johnston, the historian and archivist at the Evergreen-Conecuh County Public Library, informed me that her records showed that Lewis was buried in Row 3 of the Flat Rock Cemetery. A call to my brother and a brief talk with my father supplied me with a good set of directions to the cemetery, which is on County Road 26 at Flat Rock, On Saturday morning, my family and I made a field trip to the cemetery, where we found Lewis’ grave among a number of other Peacock graves.

In the end, I enjoyed scratching another item off my life list, one that was personally meaningful to me. How many of you out there have Civil War ancestors in your family tree? What do you know about their service? Where are they buried? Let us know in the comments section below.

* Special thanks to James Leon Windham, a member of the local Sons of Confederate Veterans camp, who also supplied me with a lot of great information about Lewis’ military service. ﻿
Posted by Lee Peacock at 10:45 PM