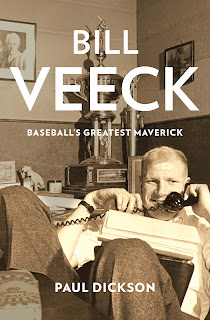 If you enjoy reading about baseball, you might be interested to hear that the editors at Spitball Magazine, the “Literary Baseball Magazine,” recently announced that “Bill Veeck: Baseball’s Greatest Maverick” by Paul Dickson won this year’s Casey Award for Best Baseball Book of the Year.

Dickson is scheduled to receive the 2012 Casey Award, which is a specially made royal blue and gold engraved Louisville Slugger baseball bat, during the 30th Annual Casey Awards Banquet on March 3 in Cincinnati.

Dickson’s book was among 10 finalists for this year’s Casey Award. The other finalists included:

- “Banzai Babe Ruth: Baseball, Espionage and Assassination during the 1934 Tour of Japan” by Robert K. Fitts

- “Gil Hodges: The Brooklyn Bums, The Miracle Mets and the Extraordinary Life of a Baseball Legend” by Tom Clavin and Danny Peary

- “The Last Natural: Bryce Harper's Big Gamble in Sin City and the Greatest Amateur Season Ever” by Rob Miech

- “The Might Have Been: A Novel” by Joseph M. Schuster

- “Pinstripe Empire: The New York Yankees from Before the Babe to After the Boss” by Marty Appel

The Casey Award has been given annually by Spitball Magazine since 1983 and a number of outstanding baseball books have received the award over the years. Past winners include:

In the end, if you’re looking for a good baseball book to read, you probably won’t go wrong with any of those mentioned above.
Posted by Lee Peacock at 9:21 AM