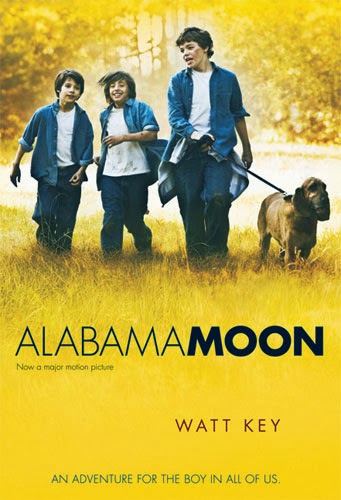 Several years ago, around the time that I first started working in Evergreen, Verne Steenwick, the director of the Evergreen-Conecuh County Public Library, recommended that I read Watt Key’s novel, “Alabama Moon.” I didn’t read the book at the time and put it on the backburner, but in the intervening years I continued to hear more and more about the novel. A couple of years ago, I put the novel on my “bucket list” and finally got around to reading it the other day.

For those of you unfamiliar with the book, it was published by Farrar, Straus and Giroux in 2006 and tells the story of a young boy named Moon Blake. Moon’s mother is dead, and he lives in a underground shelter in the Alabama backwoods with his government-hating father. His father breaks his leg in a gruesome accident and dies, leaving Moon to fend for himself.

Moon is an expert outdoorsman and probably would have survived fine on his own, but he begins to have run-ins with local property owners and law enforcement. He’s eventually taken into official custody and placed in a juvenile home. He then pulls off a daring escape and begins hiding out deep in the Talladega National Forest.

An unsavory constable continues the search for Moon, causing the boy to seek refuge with the family of another juvenile escapee. Moon befriends a local attorney, who represents him in court, where a judge determines the Moon hasn’t broken any laws. At the end of the novel, Moon is reunited with members of his family in Mobile.

Some of you may be familiar with the story thanks to the 2010 motion picture adaptation of Key’s novel. Directed by Tim McCanlies, the cast of the movie, which was also titled “Alabama Moon,” included Jimmy Bennett, John Goodman, Clint Howard, Uriah Shelton and Gabriel Basso. Rated PG, the movie was filmed in Covington, La. and is 99 minutes long.

Watt Key, who grew up in Point Clear, received the 2007 E.B. White Read-Aloud Award for Older Readers for “Alabama Moon.” In addition to “Alabama Moon,” he has published two other books – 2010’s “Dirt Road Home” and 2012’s “Fourmile.” I haven’t read either one of those, but if they are half as good as “Alabama Moon,” then they’re great.

I thought “Alabama Moon” was awesome, and I hate that I waited so long to read it. The book was a quick read, and it reminded me of several other outstanding books that I’ve read over the years, including “The Lord of the Flies,” “The Adventures of Huckleberry Finn” and Stephen King’s novella, “The Body,” which was the basis for the 1986 movie, “Stand by Me.” If you haven’t read “Alabama Moon,” I highly recommend it, especially to Alabama readers.