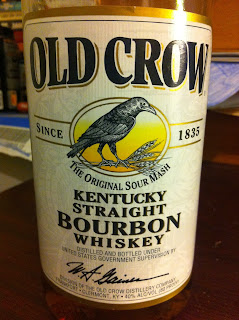 A year or so ago, I read an article that made mention of the fact that Old Crow bourbon for the favorite drink of Civil War general Ulysses S. Grant, who went on to become the President of the United States. Old Crow is also said to have been the favorite whiskey of two of my all-time favorite writers, Hunter S. Thompson and Mark Twain. Personally, I’d never even had a sip of Old Crow, so I put it on my “bucket list” earlier this year.

I’m not a big whiskey or liquor drinker, but last Monday found me and a friend in the ABC store in Evergreen. He was there to buy some “refreshments” for the Auburn-Florida State football game, and I was tagging along. As we browsed among the shelves, my eyes fell on a shiny bottle of Old Crow, which I bought in order to satisfy this item on my “bucket list.”

For those of you unfamiliar with Old Crow, it’s a Kentucky-made straight bourbon sour mash whiskey. Distilled by Beam Inc., which also makes Jim Beam, it’s one of the oldest types of Kentucky bourbon whiskeys, going all the way back to 1835. It’s barrel-aged for three years and is 80-proof, that is, 40 percent alcohol by volume. For more information, visit theoldswhiskeys.com.

Not being a big whiskey drinker, I asked around for advice on how to drink it, so that I could responsibly enjoy the experience. A friend at work recommended that I get a short glass and pack it with crushed ice from the refrigerator. He then suggested that I fill the glass with whiskey and sip it moderately over a long period of time. He also recommended that I eat a decent meal before starting.

I did discover that it was a bad idea to have more than one glass of Old Crow too close together, that is, without letting some time pass between drinks. I also never drank more than two glasses a day, and after the first day I never drank a glass before letting an hour pass after the first one. All in all, the $11.51 bottle I bought wasn’t bad.

Again, I’m no whiskey connoisseur, but I thought Old Crow was among the best whiskey I’ve ever had. I’d rank it right up there with Maker’s Mark and Jim Beam. It was smooth, had a good taste and didn’t have a sharp bite. To me, some whiskeys are so strong that I can’t enjoy drinking them, but Old Crow was just right.

In the end, how many of you have ever sampled Old Crow bourbon? What did you think about it? Did you like it? What’s your favorite type of bourbon? Let us know in the comments section below.

(The article above is about an alcoholic beverage, and I am in no way advocating the consumption of alcohol. It’s bad for you, and you shouldn’t touch the stuff if you’re not old enough to buy it or consume it responsibly. If you do decide to drink, don’t be an idiot. Have some discipline and self-control. Drink responsibly and in moderation like a grownup. Also, never drink and drive.)
Posted by Lee Peacock at 10:06 PM