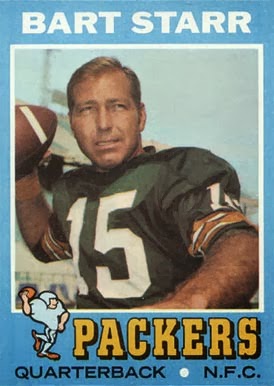 Today (Jan. 9) is also Bart Starr’s 80th birthday. Born on Jan. 9, 1934 in Montgomery, Starr is arguably one of the greatest athletes to ever come out of the state of Alabama. Starr was an All-State and All-American quarterback at Sidney Lanier High School in Montgomery and went on to play quarterback, safety and punter at the University of Alabama under head coaches Red Drew and J.B. “Ears” Whitworth.

The Green Bay Packers made Starr the 200th overall pick in the 1956 draft, and Starr would go on to play for the Packers from 1956 through 1971. Starr became the starting quarterback for the Packers in 1959 and went on to play on five NFL championship teams, including the team that won Super Bowl I.

Super Bowl I holds a special place in Conecuh County history because on the other side of the ball from the Packers that day stood Evergreen native, Wayne “Cotton” Frazier, who played center for the Kansas City Chiefs in the first-ever Super Bowl.

The NFL playoffs will enter the Divisional Round this weekend with eight teams still alive with hopes for a Super Bowl win – the New Orleans Saints, the Seattle Seahawks, the Indianapolis Colts, the New England Patriots, the San Francisco 49ers, the Carolina Panthers, the San Diego Chargers and the Denver Broncos.

On Saturday, I look for Seattle to beat New Orleans and for New England to beat the Colts. On Sunday, I look for the 49ers to beat Carolina and for Denver to beat San Diego.
Predictions last week: 2-2. So far this season: 178-82.

From the weird news file this week, I ran across an interesting bit of sports trivia in Sunday’s “Ripley’s Believe It or Not!” cartoon. According to the good people at “Ripley’s,” Deion Sanders (not to be confused with Leon Sandcastle) is the only athlete to play in both the Super Bowl and the World Series.

Sanders played in the World Series for the Atlanta Braves in 1992. That year, the Braves, with Sanders as an outfielder, won the National League West and the NLCS, but fell to the Toronto Blue Jays in a six-game World Series. Sanders finished the season with a .304 batting average and 92 hits, including eight homers and 28 RBI.
Posted by Lee Peacock at 4:11 PM